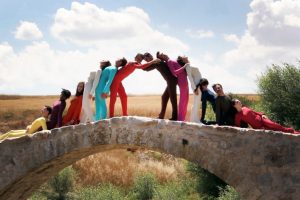 On a rainy November afternoon, Maria Zervos asked a group of students what it meant to be immortal.

“Who thinks they’re immortal here?” Many students responded, stating that immortality is never dying or going away. So, is it really just that?

Zervos, a visual artist, poet, and translator from Athens, Greece, is known for her vivid artistry and her investigation of themes including poetry, artwork, politics, nature and social criticism. She uniquely embodies the ancient world, as well as the modern artist. 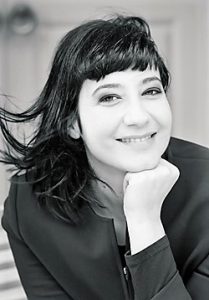 The discussion, which was hosted by English professor George Kalogeris and his “Tragedy and Literature” freshman seminar focused on the idea of being present in our everyday moments. Zervos started off by talking about a lyric poem by the ancient Greek poet Telesilla, which she translated from Greek to English. In the poem, the Mother of the gods, who gave birth to everything, becomes a woman in exile when Zeus attacks her, demonstrating the conflict between the different genders.

“Today, we talk about equality and the difference of the sexes, like it’s something that is quite contemporary, but this poet [Telesilla] did the exact same thing in 494 BC.”

Zervos asked the audience to participate in an experiment in which she had four volunteers stand at the front of the classroom and read lines from the poem. Each student had to read one line of the poem, and each had to start reading his or her line before the previous person finished. Repeated three times.

“So, what just happened now?” asked Zervos, as stumbling words and laughter died down.

“We all became immortals. How? Because we’re present. We’re here and we forgot time. That is performance. That is theatre. That is philosophy, and that is literature. To forget there is some time there, and some time before. We’re here now.”

Zervos then went on to introduce a video she produced titled, My Half of the Sky, My Half of the Earth. In the visual piece, a silent group of Olympians emerge from the woods before journeying to Mount Olympus in stillness and movement. They are dressed in bright, distinct colors in the middle of an earthly raw landscape. A narrative of the hymn poem by Telesilla also accompanies the video as the gods transcend Mount Olympus. 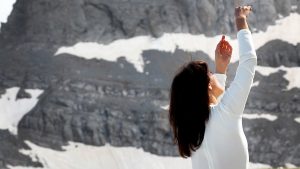 “I had this idea based on the poem by Telesilla to activate myself in terms of being an artist and performer, and sometimes an actress,” Zervos said. “I thought to myself, ‘I’m going to have to go on top of Mount Olympus’ because I thought one element of being untouchable, immortal is to cross borders.”

Moreover, Zervos explained her experience climbing to the top of the mountain, and how she was able to activate a sense of immortality, even though she felt she initially failed.

“When you’re actually at the top of [Mount Olympus], you don’t see the top. Climbing it was a striking moment for me, because you don’t see the mountain as you’re going up, and I kind of felt like I failed, even though I knew I was up there.”

“I don’t know how many of you are familiar with contemporary art,” she continued, “but much of the contemporary art today activates technology, and very fast, like advertisement.”

“Instead, I believe movement is activated by stillness. The most difficult thing is the first step. Then, you go on, but the first step is crucial.”

Zervos painted a picture by using her choreographers, dancers, performers, and actors, who at one point asked her what she wanted them to really do. She answered by telling them she trusted and believed in the future of dance and performance, and how it is embedded in stillness.

“As an artist, I feel like there is sometimes almost too much information,” she went on. “We don’t really know what’s happening, so there’s a moment where you just have to wait a minute and see what’s there.”

That is, to be immortal takes courage, and it is not an easy task to be present. Zervos continued the discussion by showcasing two of her additional video projects titled Nomadology (The Route) and Peripatetics [ATHENS], and another poem titled Artemis. In Nomadology (The Route), Zervos documents a trip she once took to Chile, where she stayed with a tribe of Native Americans in a remote place, inspiring her to explore the themes of remoteness, and the nomad— the one who doesn’t have a home and is always on the move. 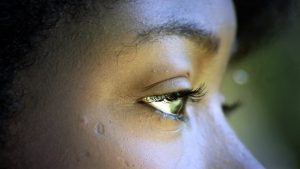 “For me, this was an amazing experience, because I documented the images of a ceremony they were having from afar,” she explained. “I stayed in a car, and that position was incredibly interesting because I had a glass window separating me from reality, which was performed in front of my eyes, without knowing what it meant. I was there, but not there.”

Thus, the images Zervos captured were comparable to individual lines of poems. With a ritualistic element and approach, Zervos successfully activates a different iconography, blurring the lines between documentary and witnessed reality. In Zervos’ most recent work-in-progress, Peripatetics [ATHENS], the camera is focused on a performance that is taking place in a city square of Athens. The area is filled with locals, immigrants, and tourists alike, emphasizing the act of walking.

“In my Peripatetics [ATHENS], it is not through walking that will get us to philosophical arguments, but the very act of walking and being present itself,” stated Zervos. “There are no filters. I’m there present without adding my lines. The images are coming from a contemporary politicized ideology that we’re looking for, so it becomes a new philosophy.”

“Peripatetic” means traveling from place to place, especially working or based in various places for relatively short periods. It is Aristotelian and refers to his teaching methods. “This activation is not fragmented, but can happen because of different fragments of reality,” said Zervos.

She concluded the discussion by reciting her poem Artemis and echoing a sentiment that is present in all of us.

…
I am the child of Artemis.
The plethora
of goods in the market is haunting.

My mouth is full of Greek.
My fingers touch my tongue.
I’ve got no problem climbing mountains.

The clouds are lonelier than my lips
while the naked palms of dreamers
touch the snowflakes
slowly falling to become the ink
of my fingerprints.
…

“When you find what you want to tell, you find another step in you: the art. The project becomes you. To create something that is yours, that you are so embedded in, that is so synchronized by your own heartbeat, is immortality.”

“So, who thinks they’re immortal here?”

Perhaps all of us, you could say.