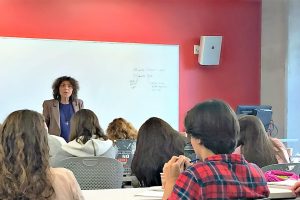 Once upon a time, in the early 70s when Zen Buddhism was becoming popular in the United States, there was a Zen Buddhist monk who came to this country to try and teach what Zen Buddhism was about. He was interviewed on TV by a famous journalist, let’s call him Dan Smith. Smith said to the Buddhist monk, “So you’ve traveled all around the world teaching Zen Buddhism. What is the most disgusting thing you’ve ever seen?” The Buddhist monk smiled his Zen smile and asked, “Who are you?” Smith, taken aback, replied, “A newspaper reporter…I’m interviewing you?” And the little Buddhist monk smiled and said, “No, no, no, no. Who are you?” At this point, Smith was a little annoyed— he was on national television and was getting fed up. He turned to the Buddhist monk and said, “Look, I’m a father, a husband, a son, I’m a newspaper reporter.” And the Zen little Buddhist monk once again asked, “Who are you?” Dan Smith was completely terrified at this point. He said, “Look, I don’t know, just answer my question.” The Buddhist monk replied, “That is the most disgusting thing I’ve ever seen – someone who doesn’t know who he is.”

Professor Donna Giancola recalled this story last Monday as she shared her insight on Socrates and Buddha regarding self-knowledge, with Professor Evgenia Cherkasova and the students in their respective seminars.

Giancola, professor and director of the Religious Studies Program, visited the “Meaning of Life” SF class on October 17th  to share her expertise on the differences between Eastern and Western Philosophy, and the contrast between Socrates and Buddha in the search for ultimate reality. 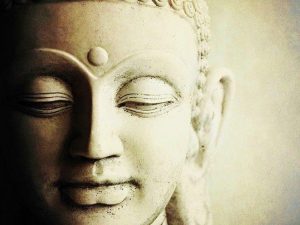 “Generally in the West, the purpose of human life is happiness, and happiness as we know is conditioned or brought about; the surge or striving for perfection. In the East however, happiness is not so much the goal. In fact, the goal of Eastern Philosophy is the idea of Enlightenment or Nirvana. The East doesn’t strive to be happy, nor unhappy. They just strive ‘to be.’ The biggest difference is also that the West is dualistic about thinking patterns, while the East sees everything in non-dualistic terms.”

In other words, Western Philosophy tends to divide fragments of reality. Western Philosophers separate themselves from God and nature. They see these things as two opposing concepts, while the East does not consider mind and matter as two different substances.

Giancola used the Hindu expression ‘Namaste’ as an example. “Namaste is the expression that is used to greet someone in Hinduism,” Giancola said. She explained that the term comes from the phrase ‘bowing to you.’ “What you’re doing is you’re acknowledging the divine in you.”

Giancola also affirmed that the divine in each of us is essentially the same. “The divine in you is no different than the divine in me,” the professor said. “And to that extent, we are not separate from each other. We all share the same humanity, and though we may have different personalities, our humanity, which bonds us together, is greater than what separates us.”

Thus, in the East, subject-object distinction breaks down, because, according to Buddhist philosophy, we are all one. We are one in the world of nature, whereas in the West, we’ve garnered an idea of separateness that establishes us as isolated, autonomous individuals.

Giancola continued the discussion by referencing the exchange between the Buddhist monk and Dan Smith, and explicated why many people do not know who they are.

“When you strip it all away— gender, nationality, race, education, likes, dislikes, personality, many people will not be able to tell you who they are,” Giancola said. “Socrates claimed that he did not know— meaning that the first step towards wisdom is to recognize the limits of our knowledge.”

Noting that the Buddha echoed something very similar, Giancola explained that his advice to his disciples was to never go beyond the limits of one’s own knowledge. In the course of our everyday lives, we often try to go beyond what we know, always assuming we know more than we do.

“How many times have you thought to yourself that you knew?” Giancola continued. 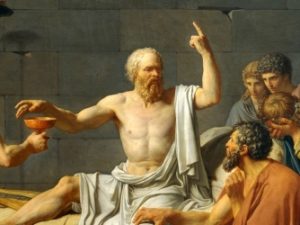 Socrates and Buddha, for all their differences, both concurred that only through the practice of moral perfection can one reach enlightenment. The professor also alluded to one of her favorite dialogues, Plato’s Apology, which recounts Socrates’s self-defense at the trial in which he was charged for not believing in the gods and corrupting the youth.

Giancola said we, as modern Western people do not keep ourselves in a check and balance because we spend very little time practicing discipline and mindfulness, but instead concern ourselves too much with the outer world, leaving behind our interiority.

“The Buddha said that when we do something, we must do it with our full presence, our full mindfulness. We’re so distracted multitasking that we lose sight of our single purpose.”

That is to say, in order to experience the fullness of a moment, we must be able to exercise control over our emotions and our mind. We are constantly led around by the thoughts, desires, needs, and wants of our physical bodies. For the Buddha, the ultimate goal is freedom from those conditions, and for Socrates, the goal is the cultivation of virtue so we have the capacity to exercise that which has been given to us.

The conversation closed with Professor Giancola recapitulating what Buddha and Socrates both fundamentally strove for: interior knowledge that can’t be taught.

“For Socrates, you can’t teach self-knowledge or virtue,” said Giancola.

“Life is not meant to be comfortable; the whole purpose of life is to evolve, and to evolve consciousness,” Giancola expressed.

She concluded the discussion by echoing a famous Pierre Teilhard de Chardin quote: “We are not human beings having a spiritual experience. We are spiritual beings having a human experience,” a statement that Socrates and Buddha, in spite of their differences, would agree on.

So, from one spiritual being to another, Namaste.